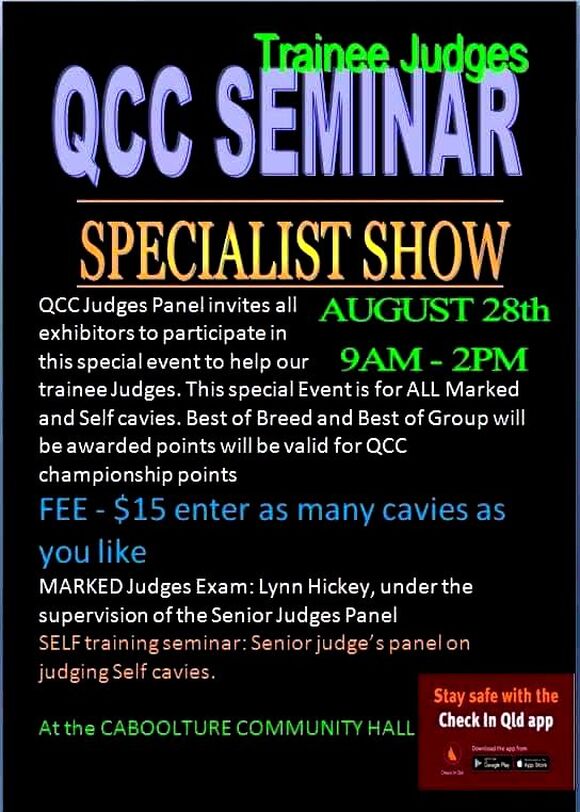 Exciting QCC event in August open to members of affiliated Queensland clubs. Enter and help our two Standard Breed trainees Lynn Hickey & Penelope Webster. Bring as many marked and self breeds for a flat rate entry of $15.

​This is a learning opportunity for the trainees, exhibitors and breeders alike. Feel free to bring almost showable animals as well. The trainees need to learn about faults as well.

31st QLD State Titles Results
NOTICE FROM THE QLD JUDGES PANEL
Applications for trainee condition judges are currently being processed.
Pet Judges Guidelines 2020
​The QLD Judges panel has created a document for which Pet/Condition classes are to be judged. The judging of Pet cavies has been the subject of much discussion with the Judges Panel and the decision was made that at all QCC affiliated Clubs shows no cavies (including pet classes) are to be judged by unqualified judges.  We are bringing this new rule into action for all QCC clubs at all shows starting in 2020. All pet classes are to be judged by either a qualified Judge, Trainee Judge or an approved Pet/Condition Judge.

Persons wanting to apply to become a Pet/condition Judge must first apply to train to the Qld Judges Panel by sending an application to the QCC Secretary. Once approved by the Judges Panel, training will be done at shows under a qualified Judge. A list of Pet/Condition Judges both Qualified and Trainees will be kept on the QCC website.
​
The Rationale is that we need our Club Shows and all cavies to be judged in a professional manner by those qualified to do so.
​
QLD Championship Claim Form

The Queensland Cavy Council is the coordinating body for all Australian National Cavy Council affiliated clubs in Queensland. The QCC represents clubs from the south east corner of Queensland to the north of the state. Currently there are seven cavy clubs affiliated with the QCC. Follow the links below to find a club near you. Many people find they join more than one club and some will follow the show circuits throughout the season.

Qld State Tiles 2016 Best in Show, Best Junior in Show and Best Longhair at the Queensland State Titles in 2016 was the Sheltie, Kolora Sentinal, bred & exhibited by Donna Wright